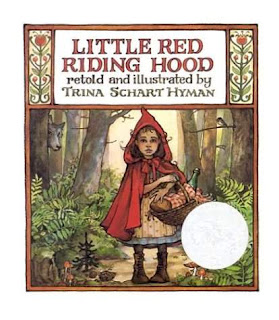 [38] A LONG time ago there lived in the country a little girl who was as pretty and good as any rose in June.
I cannot tell you her real name, but those who knew her best called her "Little Red Riding Hood." They called her so because she wore a wonderful little cloak, with a hood that was bright as gold, and red like the clouds at sunset.
This cloak and hood had been given to her by her Grandmother, who was so old that she could not tell her own age; and people said that the hood was made of rays of sunshine, and that it would bring good luck to the one who wore it.
And so it did, as you will see.
One day the child's mother said: "Here is a nice cake that I have baked for your Grandmother. You may put on your cloak and hood, and go and take it to her, so that she may have it for her Sunday dinner to-morrow. You are old enough now to find the way by yourself; but you must be sure not to stop on the road to talk with folks whom you do not know. You may ask your Grandmother how she is, and when you have rested an hour, you must come back home. Will you remember?"
[39] "Yes, mother, I will remember," said Little Red Riding Hood; and off she went with the cake, quite proud to think that she could go so far by herself.
Her Grandmother's house was a long way off, and she had to go through a big wood before she could get there. But she was not afraid. She looked at the tall trees that grew on each side of the path, and thought how nice it would be to stop a little while and play in the cool shade; and yet she did not stop. 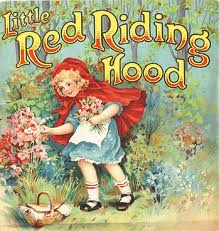 All at once she heard some one cry out: "Who goes there?"
It was a Wolf who called. He had seen the child go into the wood, and had made up his mind to kill and eat her. But just at that time he heard some wood-cutters at work among the trees, and he feared they might come that way. So he changed his plans.
He ran towards Little Red Riding Hood, and frisked around her like a pet dog. The child had never seen a fierce wild beast, and she was not at all afraid of him.

"Oh, my dear Little Red Riding Hood," said the Wolf, "how glad I am to see you!" and he smiled and bowed as well as he could.
"You know me then!" she said; "and pray, what is your name?"
[40] "My name is friend Wolf," he said. "And where are you going this fine day with your little basket on your arm?"
"I am going to my Grandmother's to take her a nice cake for her Sunday dinner to-morrow," said the child.
"Where does your Grandmother live, my pretty child?" said the Wolf.
"On the other side of the wood, in the little red house by the mill," said the child.
[41] "Ah, yes! I know where she lives," said the Wolf. "I had just started there myself. I can go faster than you, and so I will run on ahead, and tell your Grandmother that you are coming. Then she'll be looking for you, you know."
Then he smiled and bowed and left Little Red Riding Hood, and ran by the shortest way through the wood. Soon he came to the little red house by the mill.
He knocked at the door: Tic, tic, tic!
There was no answer.
He knocked louder: Toc, toc, toc!
Nobody spoke.
Then he stood up on his hind feet and lifted the latch with his paw.
The door opened. There was no one in the house.
The good Grandmother had gone to town to sell her milk and eggs; and she had left the house in such haste that she had not had time to make her bed or hang up her night-cap.
"Ah, ha!" said the Wolf, "I'll have things all my own way now!"
So he shut the door, put the night-cap on his head, and then crept into the bed. He drew the sheets about him, and lay quite still, but he did not go to sleep.
[42] All this time Little Red Riding Hood was walking quietly along, as little girls always do. Now and then she stopped to pick a daisy or a buttercup; now and then she turned to look at a bird, or to watch the bees among the flowers. At last she came to the little red house by the mill.
She knocked at the door: Tic, tic, tic!
"Who's there?" said the Wolf; and he tried to make his rough voice sound soft and gentle.
"It's me, Grandmother—it's Little Red Riding Hood!" she said. "I've brought you a nice cake for your Sunday dinner, to-morrow."
"Lift the latch, my dear, and the door will open," said the Wolf.
"What makes you so hoarse, Grandmother?" said the child, coming in. "Have you a cold?"
"Yes, dear, a very bad cold," said the Wolf, and he tried to cough. "Shut the door and latch it, my lamb. Put your basket down, and then take off your pretty cloak and come and sit by the bed. I want to talk with you a little while."
The good child did as she was told,—but remember this: she kept her hood on her head!
She thought it strange that her Grandmother had changed so much.
"What makes you look that way, Grandmother?" she said. "You look like friend Wolf."
[43] "Oh, it's the night-cap that makes me look so," said the Wolf.
"What hairy arms you have, Grandmother!"
"All the better to hug you, my lamb."
"Oh, what a big tongue you have, Grandmother!"
"All the better to talk with you, my lamb."
"Oh, what a mouthful of great big teeth you have, Grandmother!"
"All the better for eating you up!" and the Wolf opened his jaws wide to bite the child.
But she put down her head and cried, "Mamma! Mamma!" and the Wolf caught hold of her bright hood.
Ah! What made him jump back as if something hurt him? What made him cry and shake his jaws as if he had tasted red-hot coals?
It was the little hood. The little hood had burnt his tongue and his throat and scared him out of his wits. For, let me tell you, the hood was a magic cap like those that you sometimes read about; and no harm could come to the child who wore it.
The Wolf jumped off the bed and ran about the room, trying to find the door, and howling and howling as if he had lost all his senses. And this was really the case; for in his fright [44] he fancied that all the men and dogs in the country were after him.
Just then the Grandmother came home from town with a long empty sack on her arm. She lifted the latch and saw the Wolf.
"Ah, you thief!" she cried. "Just wait a bit, and you'll see what I'll do with you."
She opened the sack wide across the door, and the scared Wolf sprang in, head first. No trap could have caught him so well. The brave Grandmother shut the sack; she tied the strings; she ran and threw it into the well; the Wolf was drowned.
"You scoundrel!" said the Grandmother. "You thought you would eat my little grandchild, did you? Well, the dogs shall eat you to-morrow, and Little Red Riding Hood shall have a muff made of your skin!"
Then she ran into the house, where the child stood crying and trembling with fear.
"My dear little one," she said, "if it had not been for your magic hood, what would have become of you?" And then she gave her a good piece of her cake and made her drink a small glass of fresh milk.
After that she took her by the hand and led her back home
Posted by YUNITA HENTIKA Blog Yunita Hentika Dani at 12.20.00 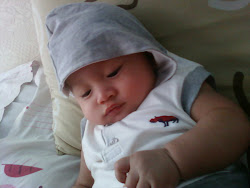 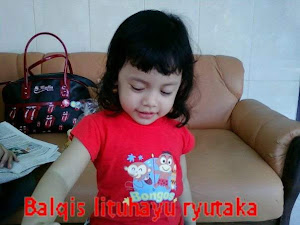